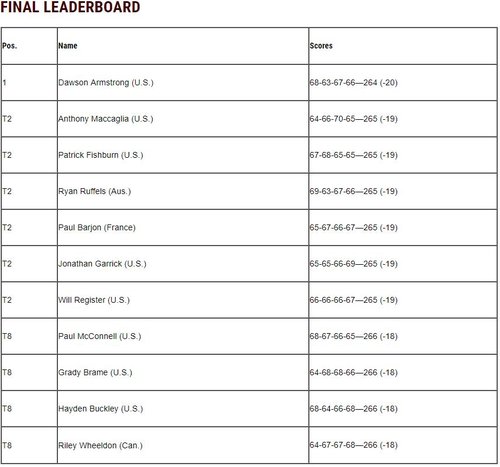 WINDSOR, Ont.— Entering the final round of the Windsor Championship with 26 players within four strokes of the lead, the stage was set for an incredible day of golf. Sunday did not disappoint.

Especially if your name is Dawson Armstrong.

Opening with two birdies in his first three holes, the Lipscomb University alum managed a clean card, marking down three more circles throughout the day.

Not having to make a par putt from outside three feet for the duration of the round, Armstrong picked up his first-career Mackenzie Tour title by one stroke over six players.

“I’ve never seen a leaderboard as jam-packed as that one,” said Armstrong following the victory. “Come about No. 16 today, there were 12 guys within two shots of the lead. It was just jam packed all day and anyone could make a run at any given time.”

Playing in the third-to-last grouping of the day, Armstrong tapped in for par on No. 18 at 20-under and managed to dodge bullet after bullet as he became a highly-engaged spectator. This was already after Patrick Fishburn missed a short par putt on the last hole in the group ahead to drop to 19-under.

Playing competitor Ryan Ruffels missed a six-foot birdie putt which would have matched Armstrong in the clubhouse. At the same time, the entire final group of Bryson Nimmer, Jonathan Garrick and Will Register, who were all within one-stroke of the lead, made bogey on the difficult No. 16 to fall two back.

Register managed birdie on No. 17, giving himself a chance to force a playoff, but had to chip out from the fescue following his drive, leaving himself 65 yards to the pin.

“I called my fiancé [after finishing] and she said, ‘don’t get excited until you know for sure’,” said Armstrong. “I really kept an even keel and came out here and watched, there was nothing I could do but just accept whatever happened.”

What happened was that Register almost made it - twice. The ball landed two inches from the pin, jumped a few feet past, and slowly trickled back, burning the edge of the cup; Armstrong hugged caddie Derek Bayley.

“That was the most nerve-racking shot I’ve ever seen from someone, he’s got some guts to hit that shot when he needed it,” said Armstrong. “Sadly, he didn’t make it and sadly, we didn’t have the chance to perform in a playoff. (Register) is a deserving player and he’s going to get his share out here.”

Entering the week No. 13 on the Order of Merit, Armstrong said that it was his previous professional experience that helped propel him through Sunday.

“This is my 15th event up here, so putting myself in contention two of the last four events, I’m really happy with where I was,” said Armstrong. “The game felt great and I’m more confident than I’ve ever been.

“To have it all cap off this week was really special, because it feels good to be back in that situation where you have the nerves running and you have to calm down and just perform, that was the best feeling.”

His second year on the Mackenzie Tour, Armstrong had a moderately successful debut campaign, finishing in spot No. 34 on the Order of Merit following a successful collegiate career where he managed the lowest career scoring average (71.2) in Lipscomb history.

“Last year I never felt like I could get myself in contention, whether it was me backdooring a top 10 or worrying about the cut every week, it was a different mindset last year compared to this year,” said the 23-year old. “Instead of trying to finish top-10, I’m going out trying to win, and this week it worked out pretty good.”

Fishburn, Ruffels, Garrick, Register, Paul Barjon and Anthony Maccaglia made up the grouping one stroke back, while Riley Wheeldon managed his second Canada Life Canadian Player of the Week title of the season, as well as his first top-10 finish of the year, finishing two strokes back at T8.

“People to thank; my parents obviously. My fiancé Sam, she’s helped me through everything so far, on and off the golf course. My family has been so close and special to me, they have my back every week and keep me positive every day whether I play good or bad. All the friends I’ll hear from really soon, but I’ll make an effort to call my fiancé first, and then parents and grandparents.” – Dawson Armstrong

“The first week of the year I was in second going into the final round with Canadian James Allenby, so having 150 Canadians rooting him on every shot, it really got me nervous. Being out here and seeing this crowd was great, but I felt more prepared for it than ever. I tried to stay in the moment really well and the crowds really helped me stay calm because I remembered they’re here to support and not criticize, I really tried to turn fear into excitement, and it was fun.” – Dawson Armstrong

“I absolutely love (Canada). The people here are the nicest people I’ve met, and the cities have the best weather during the summer. I’ve loved every city so far. The golf courses are in great condition and we’re able to get better every week. You have volunteers and fans out every week cheering us on; overall, Canada has been a great experience.” – Dawson Armstrong

“I said on Friday, the first thing to go is usually the driver for me, especially in stressful situations, but this week the driver was in really good shape. I made sure I had good contact off the face most of the day, which I did really well besides one or two shots, I kept it in front of me and gave myself very few long par putts, the furthest was maybe three feet, so making it a stress-free day and having good rhythm out there, trusting my lines and my caddie, Derek Bayley, he helped me a ton.” – Dawson Armstrong

“It’s indescribable, the goal was to finish top-20 and I was still thinking about that making the turn and thought a good back nine would do it. I got a little hot there, saw my name creeping up the leaderboard, and finished strong and took care of business.” – Anthony Maccaglia

“I battled hard and finished strong to end up where I did, it was a little disappointing, but all-in-all it was a good week. You had to focus so hard on what you’re doing, there were so many guys with a chance and so many birdies out there, somebody from six or seven back could have won this tournament.” – Riley Wheeldon

“The fans were great this week, it’s a good sports town and we had a good gallery on 18 cheering me and the other guys on. The Canada Life bonus is a nice incentive every week, you have to play good, there are lots of really good Canadians, and luckily I snagged my second one of the year.” – Riley Wheeldon

< Back to News
© Copyright 2020 Mackenzie Tour | All Rights Reserved.